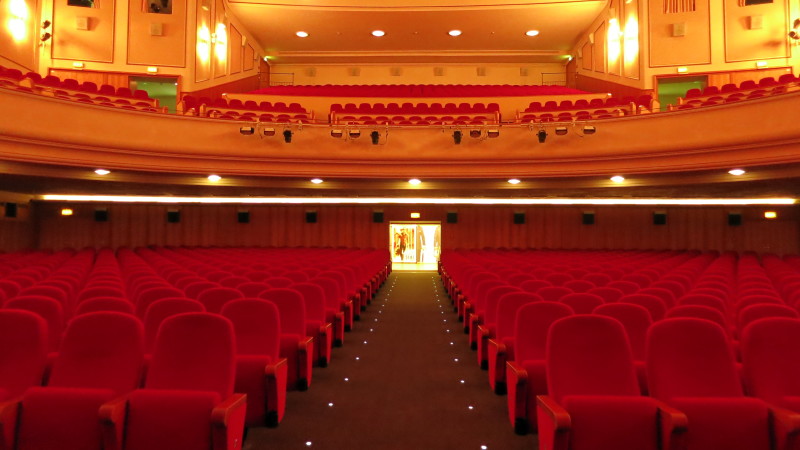 Theater, view from below

The Lichtburg is a historic cinema in the city centre of Essen. Today it has 1.250 seats and is the largest cinema in Germany. Originally built in 1928, the building has been a listed building since 1998. Since the last conversion in 2003, a second small cinema hall with 150 seats is located in the basement, named after the Indian film actor Sabu.

In 1924, the city of Essen decided on a general settlement plan with the help of which the central Burgplatz was to be redesigned. For this purpose, a new bioscope dominating the square was planned in the New Objectivity style. It was to replace the old district hall.

The Burgplatz-Bau AG, which consisted of city administration and private investors, set itself the goal of creating a homogeneous city architecture. For this project, the Essen City Planning Councillor Ernst Bode designed the Lichtspielhaus as a building, and the Essen architects Heydkamp and Bucerius (Richard Heydkamp and Curt Bucerius) designed the interior with a dome of 20 metres in diameter, the largest in a German theatre at the time, based on original designs by the architect Lothar Kaminski.

The new cinema was opened under the name of Lichtburg on 18 October 1928 and had around 2.000 upholstered folding seats with an electric space signalling system. The moment a spectator sat down, a closed electrical contact would report to the cashier sitting at the entrance that the seat was taken. For the grand opening, the 150,000 Reichsmark Wurlitzer cinema organ was played for the first time, the largest of its kind ever installed in a European cinema until then. It was already able to imitate traffic noise and thunder. The Lichtburg Orchestra, some of whose musicians also belonged to the Cologne Philharmonic, played Orpheus in the Underworld under the baton of Josef Schafgan. Later it accompanied silent films. After the performance of the ballet group from the Paris Varieté Folies Bergère, the curtain was opened for the main film Marquis d'Eon, the Spy of the Pompadour.

About one year after its opening, the sound film came to the Lichtburg.

During the National Socialist era the Lichtburg was used for propaganda purposes. The Deutsche Wochenschau was presented here as well. It often showed film footage from Essen - for example whenever Adolf Hitler visited the Krupp factories. For the National Socialists, Essen was an important site for industry and armaments.

In 1933/1934, the Jewish director, Berlin based publisher, entrepreneur and co-founder of German film journalism, Karl Wolffsohn, was forced to sell the cinema to Universum Film AG far below its value by massive pressure from the Essen NSDAP district manager Josef Terboven. Thus the Lichtburg is an early example of the Aryanization of Jewish property in Germany. Wolffsohn received only a tenth of the actual value. He fled with his family to Palestine in 1939. In 1940 the antisemitic propaganda film Jud Süß was shown in the Lichtburg.

During the Second World War, the Lichtburg was almost destroyed by the Allied bombing raids on Essen in 1943. Essen was a main target of the Allies because of its armaments industry. The showroom burnt out completely, but the façade remained intact.

Almost two years after the end of the war, the city searched for new operators by newspaper advertisement. Heinrich Jaeck and Erich Menz, who had already maintained several Essen film theatres before the war, were commissioned to run the Lichtburg as a first-class top theatre. The cinema hall was rebuilt between 1948 and 1950 in the formal language of the early 1950s. It now offered 1.700 seats. The architect Carlos Dudek was particularly involved in the reconstruction of the Filmbar.

The reopening took place on 23 March 1950 and included a speech by Lord Mayor Hans Toussaint. Director Willi Forst appeared in person for the screening of his opening film Wiener Mädeln.

During the 1950s and 1960s the Lichtburg was regarded as the most important premiere cinema in Germany. It benefitted from good contacts of director Erich Menz to film producers and distributors. Romy Schneider attended the film premiere of Die Deutschmeister in 1955. Since Germany breathed a sigh of relief after winning the 1954 Soccer World Cup, many of the successful soccer players were also in attendance, including Helmut Rahn from Essen.

Between 1960 and 1993 many films premiered in the Lichtburg and numerous national and international stars signed the guest books, among them Zarah Leander, Jean Marais, Heinz Rühmann, Hans Albers, Heinz Erhardt, Pierre Brice, Lex Barker, Buster Keaton and Gary Cooper. The Lichtburg was also frequently used as an event hall and offered a stage to great artists such as Louis Armstrong with Velma Middleton (1952), Count Basie or Juliette Gréco.

From the mid-1990s onwards, the Lichtburg was repeatedly threatened with closure. The building complex in which the Lichtburg is located was also in need of renovation.

In 1998, the Lichtburg passed into the hands of Essener Filmkunsttheater GmbH, whose managing director is Marianne Menze, who runs the Lichtburg together with her husband Hanns-Peter Hüster to this day. With their help and the support of the cultural advisory board of the city of Essen, it was possible to recruit politicians, artists and media representatives to support the preservation of the Lichtburg. Among them there were Wim Wenders, Wolfgang Niedecken and Gerhard Schröder.

Finally, in the year 2000, a unanimous decision was taken by the council to preserve the Lichtburg as a cinema. After the decision to establish the Adult Education Centre Essen in the east adjacent to the Lichtburg building, investors were found with whose help the project finally took shape. In a major one-year project amounting to seven million euros, the architecture was completely restored in the style of the 1950s. This included the façade as well as the historic cinema hall, the foyer, the film bar (formerly called Tea Room), offices, restaurants and the new extension of the Adult Education Centre, which was designed by the architects Hartmut Miksch and Wolfgang Rücker.

After its restoration in March 2002, the Lichtburg was reopened on 16 March 2003 with the German premiere of the film Das Wunder von Bern. The studio theatre from the 1970s gave way to today's Blue Salon.

Today the Lichtburg has a 150 square metre roll-up screen equipped with modern projection technology, behind which there is a stage allowing the hall, seating 1250 spectators, to be used for theatre and cabaret events as well as readings and concerts. As one of the few cinemas in Germany, the Lichtburg is still equipped with a 70 mm film projector. The sound system is designed for Dolby Digital and DTS. A further 150 seats are added in the second, small Sabu cinema.

Today the Lichtburg is once again the scene of numerous premieres, especially of works by German filmmakers. It is still not an arthouse cinema. Due to its size, the focus of the programme is on American and European mainstream cinema.